It seems that advertisers who depend on calls going to a central phone number for conversion tracking may encounter a challenge as of January 19, 2017.

On Thursday, Google emailed some AdWords advertisers with an unexpected email explaining upcoming changes to the phone numbers that appear in ads. The change will affect campaigns that use both call extensions and location extensions.

Over the past year, Google has expanded exposure for ads that include location extensions, which included showing ads in Local Finder results and in Maps. Google states it “may” show the local retail phone number when that store’s location extension shows in an ad, even if within the campaign the call extension uses a different phone number. This is in order to increase the relevance of ads that feature specific business locations.

This two-week notice was the first communication of the change. So, why does the email say a location-specific phone number “may be used” instead of “will,” well it seems Google may be continuously testing. Which means it’s possible the ads could still potentially show with no number in the location extension.

Therefore it’s advised that advertisers who have location extensions are advised to ensure their Google My Business listings have set accurate phone numbers for each of their locations.

Consequently, that draws us to the problems that many advertisers will face with this new change.

There are numerous situations where advertisers with a physical location may prefer to have calls directed to a central number or call centre. Especially seeing as the main reason with AdWords is the lack of call conversion tracking at the individual location level. Google is obviously aware of this concern, as there is actually a form that advertisers can submit before the change, so they can opt out of having local numbers show in location extensions. However, Google does warn that it could negatively impact ad impressions (and, in turn, calls). Subsequently, one of the reasons Google lists for opting out through this form is: “I want detailed call reporting and the ability to track conversions from these phone calls.”

According to a Google spokesperson, they are actively exploring conversion tracking on location-specific phone numbers. However, until that happens, it seems advertisers that are not equipped to have calls come to individual locations, and don’t want to lose conversion tracking, will be in a precarious position come the 19th of January.

Below is the email received from Google on Thursday (with all identifying information removed). 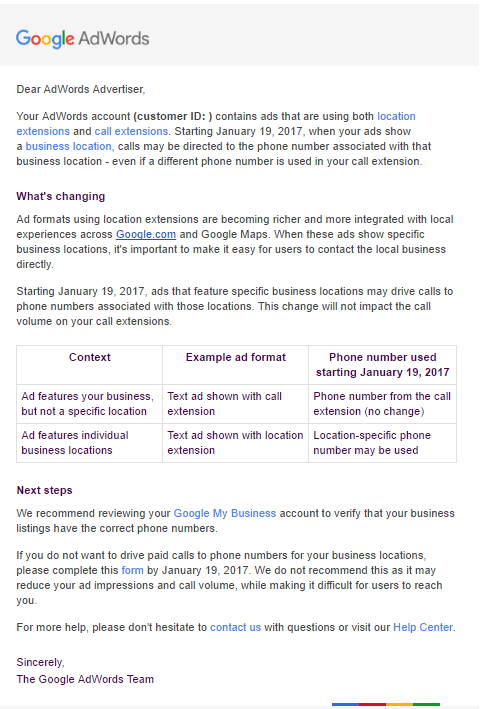